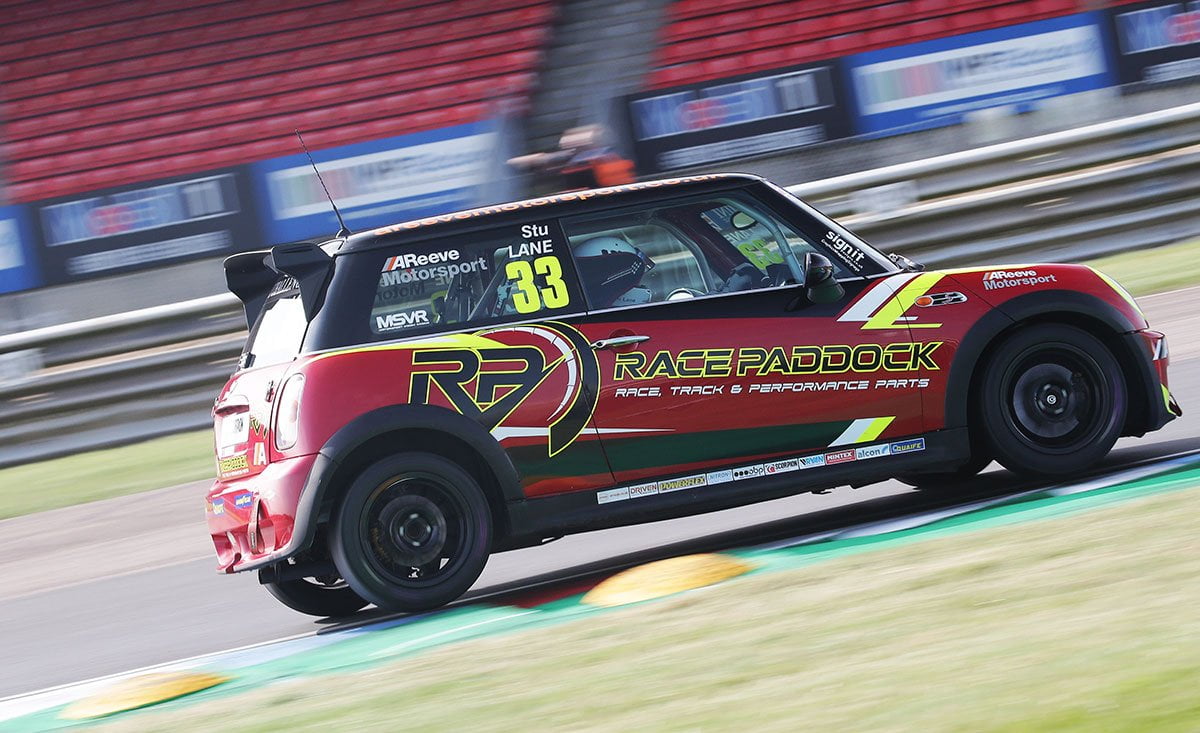 Last weekend the MINI CHALLENGE headed to the UK’s fastest race circuit, Thruxton for their second round of the season. They were again supporting the British Touring Car Championship which would normally include huge crowds but this time everyone would be watching the live TV coverage on ITV2.

The Coopers would not disappoint the fans at home and provided a great show. The large grid of 27 cars allowed for very close racing. With up to five cars wide going through corners together and countless overtakes, the racing was very entertaining to watch!

Having previously raced in the Cooper S Class, Stu Lane welcomed the big grid size and close racing that the Coopers bring. The Cooper race car is naturally aspirated with about 135BHP and is a big difference to the Turbo version in the Cooper S. This meant keeping momentum around the track and being smooth to get the best lap times. The weekend began with a test day, Stu using it to learn the circuit and get used to the car.

Qualifying was 30 mins and every driver was trying to get a tow down the back straight to gain an advantage – which in such a tight grid was huge. Stu’s best time put him 1.5s off the fastest time which would end up 17th.

Race 1, the cars lined up on the grid and Stu made a great start. With so many cars, the racing was manic. Cars were everywhere and Stu’s absence from racing for a year showed as he dropped back a few places but started to recover and gain ground back. The race finished with a red flag following an incident, but it was a good warm up for the two races to come.

Sunday arrived and both races would be aired live on ITV2. The grid lined up, Stu in 18th. Stu quickly got switched on this time and climbed to 15th but an incident saw the race stopped and would be re-gridded. The second half of the race, Stu battled with the surrounding cars and finished 19th overall.

Race 3 and as the sun was low in the sky, the cars once again set off. Stu’s previous races had helped him gauge his competitors and using this Stu climbed to 16th, quickly swapping places with fellow competitors before a final red flag saw the end of the race.

Overall a great weekend in the Coopers. Plenty of positives to take away and a great experience racing in such a big grid in a very competitive environment.

The Coopers next round is at Snetterton but Stu will be hanging up his race suit for this year to focus on providing media duties for the remaining rounds of the JCWs.

“What a great weekend! I’ve loved racing in the coopers, many of the drivers I’ve known for years and raced with previously, so it was great to be back with them on the grid rather than in the paddock. The youngsters are so competitive and I’ve got some work to do if I want to get to the front of the pack.

Unfortunately that’s my only round this season, but I’d like to thank RacePaddock.co.uk for their continued support and AReeve Motorsport for their hard work throughout the weekend.”

RacePaddock provide a huge range of Motorsport products and services to all levels of motorsport.

Stu Lane to return to MINI CHALLENGE with AReeve Motorsport

Summing up my 2019 race season in EnduroKa and the C1 Race club.

Why you need a logo – and some tips for designing yours