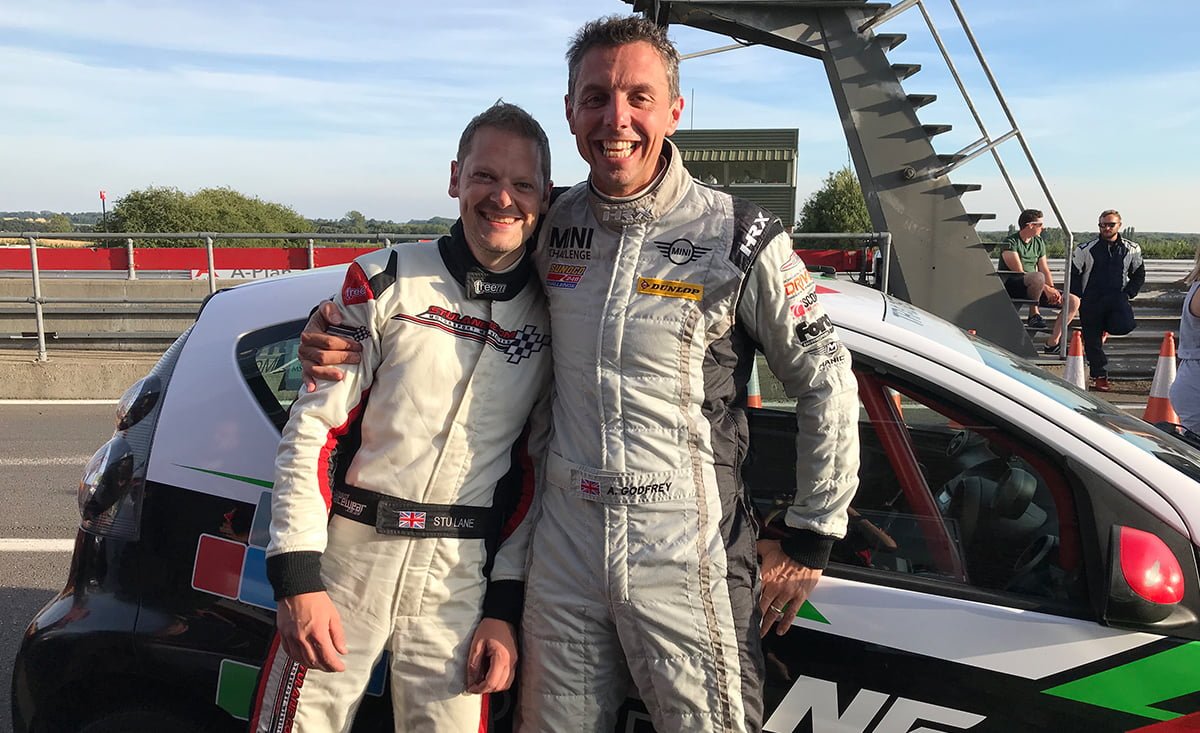 The sun was shining as we arrived at the track ahead of our first C1 Race Club four-hour endurance race at Snetterton – a circuit both Stu Lane and Andy Godfrey previously had success on, in fact the last visit in the MINI had got both drivers podiums spots and Stu with a win so we were looking forward to seeing how we performed in the Citroen C1. With our selected Pit Crew James Wakefield & James Manning spannering the car and running the strategies, we felt that we had a good base to enhance our C1 experience.

The C1 is essentially a standard road car which has been made safer using a Safety Devices Roll cage, Corbeau racing seat and a 5-point harnesses. There’s also an electric cut off and a fire extinguisher. The handling has been slightly improved using extended front wish bones which helps reduce understeer and get the back to slide around, assisting in cornering.

With 53 cars on circuit, qualifying would be interesting! It was our first chance to see how competitive we were against the grid, and we quickly found that most competitors were using shaved Nangkang tyres which gave a clear improvement in handling. We, however were on brand new standard Nangkang tyres and it gave resulted in us sliding around a lot more, we also were using the standard suspension supplied with the car, we observed that most cars were on Bilstein springs that appeared to give less roll on the bends. nevertheless, we manged P29 of 53 – some six seconds off the poll. We were happy with mid-field and it was now time to prepare for the race.

Stu was to start the race. Due to the huge field of cars, the race began as a rolling start, with two safety car laps to get the cars in formation and as the safely car exited to the pits, the race began.

From Stu’s first stint, we went from 29th to 22nd. After the pit stop, we dropped to 39th place but with each team deciding when they were pitting (with a minimum of three stops required), the places frequently changed. We were really getting into the race and making steady pace amongst the rest of the field.

As our tyres continued to wear, the grip level improved and so did our race position with both drivers managing constant fast laps then their previous qualifying times. Problems appeared during Andy’s first stint as our Transponder stopped working which is required to count each cars times and laps. This meant we fell to the back of the timing. We decided to continue with the faulty Transponder as it was too late to recover the lost time so although frustrated, we pushed on but now three laps down once the transponder decided to work again. With the pressure of a top position gone, Stu’s second stint was fast and consistent, after a little over an hour, Stu brought the car into the pits – clearly enjoying himself with the radio on full volume! A few seconds later, Andy was strapped in and headed out for the final hour of the race. After our timing problem putting us back, we managed to gain nine places and finished 34th. We calculated that without the Transponder problems, we would have been around 12th – 15th so overall were very happy with our performance.

The little C1 performed outstandingly throughout the race as did the two James in keeping us all going. We learnt a lot to take into the next race. The racing was really clean, and everyone gave racing room to their fellow competitors, in fact during the entire race we had no contact, apart from a small nudge from behind which didn’t even mark the car.